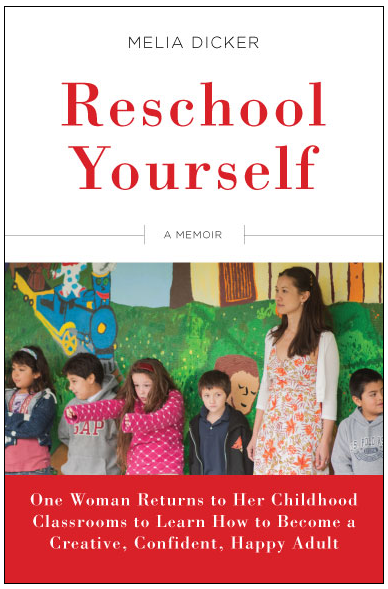 I haven’t updated the site in years and was touched to see that several people had left comments or contacted me about where to find the memoir I’d written about the Reschool Yourself experience. After toiling over the writing, I drafted a manuscript and had some beta reader copies printed. A few loved ones were kind enough to send back annotated copies with suggestions and edits.

During this time, I began to have a growing sense that though I’d finished the book, it wasn’t the one I wanted to write. As Elizabeth Gilbert told Glennon Doyle after reading the first draft of “Untamed,” ‘You’re writing a book about wildness and you’re not writing it wild.”

In 2020 I was diagnosed with ADHD, which explains a lot of my challenges with sequencing the narrative and producing the writing. I would love to revisit the manuscript and shape it into a series of essays. It’s been interesting to revisit this work at different stages in my life, with new layers of knowledge and perspective on what happened in school and during the project.

Below is the book’s first chapter.

It wasn’t until I saw some photos of myself one November afternoon that I realized that my life was heading in the wrong direction.

I came across the photos while putting together a graduation slideshow for Spark, the youth program that I’d co-founded three years before. Meanwhile, my students sat at tables around our classroom, bantering and giggling as they worked on their presentations about the apprenticeships they’d done in their dream jobs that semester.

Scrolling through the pictures on my laptop, I separated out the ones that captured the best moments of the program. Laura, a pint-sized twelve-year-old, grinned as she showed off her new dog-training skills. Thirteen-year-old Eduardo and his mentor, a police officer named Jesse, beamed as they stood next to Jesse’s patrol car.

Then I saw a photo of me. In contrast to the kids, I wasn’t looking at the camera with excitement and delight. I was pressing my phone tightly to my ear and furrowing my brow, as if I were talking through a crisis.

That was a rough day, I thought. Surely there’s a better shot of me in here somewhere.

I kept paging through the photos. More happy, goofy kids excited about what they were doing. Then another picture of me on my cell phone, my face pinched with stress. My clothing was different, but my expression was the same. Alarmed now, I began to scroll more quickly, searching through a few dozen other photos for one of me smiling. I couldn’t find a single one. It just didn’t exist.

I looked around the room at my students, whom I’d grown to care very much about. They were the ones who had taken most of the photos.

Is this the way I look to them? I thought. I didn’t want them to think that growing up meant becoming bitter and joyless. Even more, I didn’t want to be the person in those pictures.

Until that moment, I hadn’t realized that my tendency to push myself to the limit had reached threat level orange. Not that there weren’t signs. In the mirror every morning, I’d seen my clenched jaw and the dark hollows deepening under my eyes. On some days, I’d stay at the office until nine p.m., seeing the sky darken outside my window, then drive straight to the gym and not get home until ten. The next morning, I’d start the routine all over again.

Because I didn’t leave any spare time in my schedule, I didn’t attend to tasks like opening my mail or putting away my clothes. When I remembered to check my bank account, I was shocked by how quickly I’d depleted it, while at the same time my credit card bills were mounting.

My growing list of health complaints included a stomach twisted in knots, painfully tense muscles, and the feeling that I was a rubber band stretched to its limit, ready to snap at any moment. My co-workers could hear the tension in my voice when I spoke with them. Hell, they could feel it when I walked into the room.

My friends would occasionally ask, “Have you thought about leaving Spark?” and I would brush off the suggestion out of hand. I’d invested too much in building the organization to even consider it.

But seeing the photos of myself felt like someone had taken me by the shoulders and shaken me into awareness. I couldn’t forget the image of my scowling face as I drove home that evening, or as I lay in bed with my mind whirring.

If I did, I could imagine seeing similar photos before the next program graduation, and the one after that. Thinking about running in place indefinitely, worn out and dispirited, terrified me. Years in the future, I could see myself looking back on my life and thinking, Was that it?

I’d been going full throttle since my early days in school, believing that if I followed the rules and worked hard, I would see some kind of reward in the end.

Seeing the pictures of myself had woken me up to reality: I was almost thirty, and I was living paycheck-to-paycheck doing a job that was burning me out. Happiness and financial stability weren’t suddenly going to drop out of the sky and into my lap.

I thought back to all of the times in school when I chose studying over having fun, holing up in the library instead of spending time with my friends. There were too many to count. I felt like I’d been lied to, like I’d wasted the last two decades of my life chasing a delusion. I didn’t know where I could possibly go from here.

My only comfort was that Spark’s graduation marked the beginning of the holidays, which gave me two weeks off to think through my next steps. I would be getting out of San Francisco and going home to Sonoma, where my parents had lived long before our town would become known for its wine and food. I couldn’t wait to be inside the safe haven of my childhood bedroom, and to feel the warm reassurance of my family’s holiday traditions.

But this time being home made me feel even worse. Nothing—not even decorating the Christmas tree, baking buttery cookies, and opening presents with my family—could lift my spirits. I just felt numb. I sat on my bedroom floor and listened through the door to my mom and my sister laughing in the kitchen. Normally I’d walk down the hall and ask them to let me in on the joke, but this time I knew I would just dampen the mood. When I’d struggled with depression in high school, this is what it had felt like. I stared into space, at a loss for what to do.

After Christmas, you need to get away from everything, I told myself. Go somewhere and clear your head.

Within the hour, I’d booked two nights at a hostel on the coast, perched on the cliffs overlooking the ocean. I didn’t know it at the time, but I would come out of this retreat with exactly what I was searching for: a clear path into the next chapter of my life.